Quarter size chasuble-making day at the Royal School of Needlework

The Guild of St Clare is delighted to announce a new one day course at the Royal School of Needlework at Hampton Court Palace, making a quarter size Roman chasuble. The tuition will be provided by RSN tutor Heather Lewis, who has led previous Guild of St Clare courses at the Royal School of Needlework in ecclesiastical goldwork, stole-making and burse-making. This is a remarkable opportunity to learn the skills necessary for making a chasuble, using traditional hand-construction techniques. 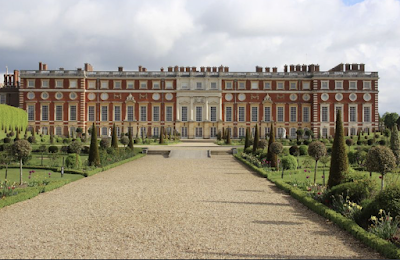 It will take place on 19th March between 10am and 4pm. The price of the course is £145 including materials. Tea and coffee are provided; you will need to bring a packed lunch, or you can visit one of Hampton Court Palace's cafes. 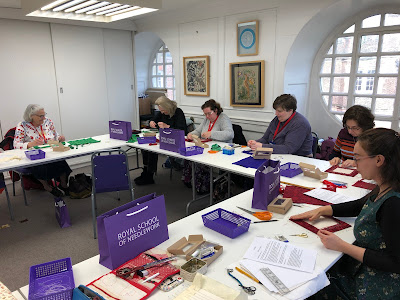 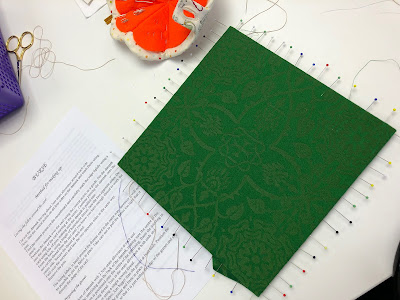 For more information please email Lucy on lucyashaw@gmail.com, or book through the registration link on the LMS website. 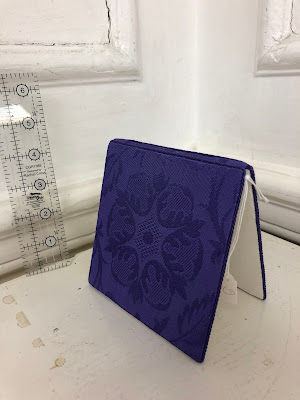 Posted by Queen of Puddings at 07:18 No comments:

Volunteers sought for our Vestment-Making Drive

The Guild of St Clare has been commissioned to make new pieces for a number of incomplete Low Mass Sets: maniples, chalice veils, burses and stoles. We are looking for volunteers willing to help with this work: materials will of course be provided. For each completed new piece, we will give the maker a discount of 30% to use when booking our twice annual sewing retreats (up to a maximum of 60% off per retreat).

At the Guild of St Clare we use traditional hand construction techniques to make vestments: if you would like to participate in this scheme, and have no experience of these, we will be happy to show you, and guide you through the project.

For more information, or to volunteer, please email Lucy at lucyashaw@gmail.com.

Posted by Queen of Puddings at 01:00 No comments:

Michael Dennison, a much-valued participant at our most recent Sewing Retreat at Douai Abbey, has recently completed this most accomplished chalice veil and burse as a gift for Fr Mark Naughton. A training exercise for Michael; Christmas come early for Fr Naughton! 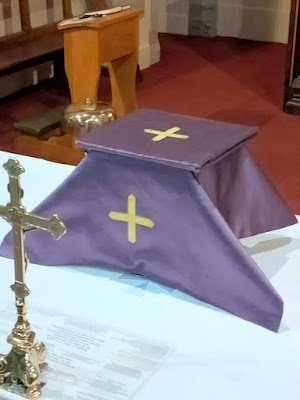 Posted by Queen of Puddings at 03:37 No comments:

Our most recent sewing retreat took place at Douai over the weekend of 12th-14th November. Douai has reduced the maximum number of retreatants, so we were a small gathering of twelve, including our chaplain Fr Stephen Dunn, who very kindly travelled all the way from Glasgow to be with us. 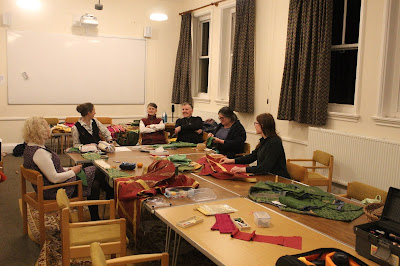 We achieved a huge amount of work: two maniples and a chalice veil were among the new pieces which were made, as well as significant repairs to the LMS violet High Mass set, and the patching of the Guild's own green Low Mass set. 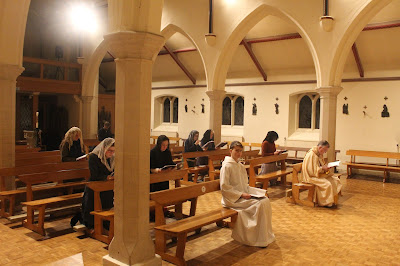 It was a pleasure to welcome several retreatants who were new to sewing, as well as old hands whose skills were very much needed. 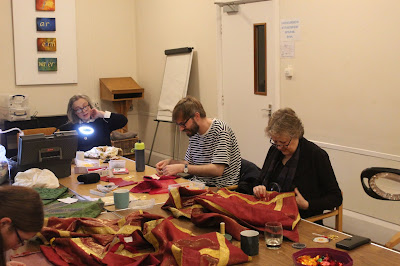 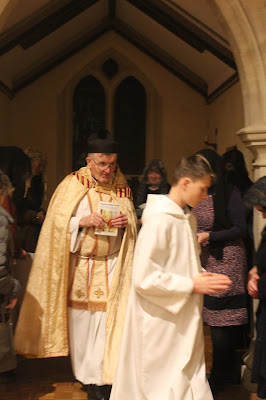 Our next retreat is 4th-6th February 2022, at a new venue: Park Place Pastoral Centre. Our chaplain is Fr Stephen Morrison, a great friend of the Guild of St Clare. Click here to book online or email Lucy at lucyashaw@gmail.com for more details. 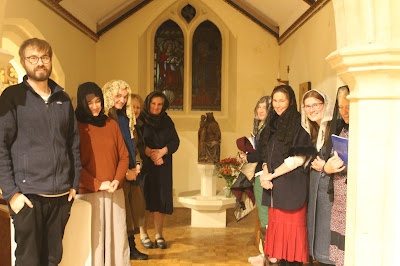 Many thanks to Michael Dennison for the photographs

Posted by Queen of Puddings at 06:48 No comments:

Online Stole-Making Course with the Royal School of Needlework

We are delighted to announce that the Guild of St Clare is collaborating with the Royal School of Needlework to provide a special online one day course in stole-making.

This is a unique opportunity to learn the skills necessary to vestment-making. The tuition will be provided by RSN tutor Heather Lewis, who has led previous Guild of St Clare courses at the Royal School of Needlework in ecclesiastical goldwork and burse-making.

As this course is taking place virtually, students will need to provide their own materials. Please email Lucy at lucyashaw@gmail.com for more details.

The date is the 30th October 2021, and the course will run between 10am and 4pm. Thanks to our long-standing relationship with the RSN, we are able to offer this course at a reduced price which, excluding the materials, is £108. Online booking for this event is now open: click here to register. 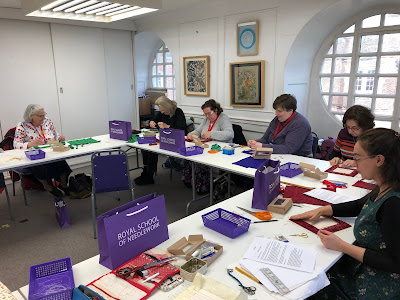 Posted by Queen of Puddings at 03:39 No comments:

Sewing is for everyone

The publication of Traditionis Custodes has given rise to a great many attacks on those attached to the Old Mass: the most recent, in this country, is published this weekend in the Tablet, by Austen Ivereigh. The focus of his assault is Mass at the parish at Ledbury, and he makes many grievous accusations, none of which stand up to scrutiny, but which nevertheless have caused distress and division not only amongst the faithful at Ledbury but in the wider community.

Perhaps the least of his broadsides was the one aimed at the Guild of St Clare. Here it is:

'LMS Chairman Joseph Shaw explains in the new edition of Mass of Ages how "traditional Catholics" must respond to the "new attitude of the Holy See" of "official hostility towards the traditional Mass". He asks his followers to steel themselves for mockery and persecution, to suffer for the "spiritual treasure" that they are "under a duty to preserve". He suggests they read his books and attend classes for vestment-sewing (women) [sic] and altar-serving (men).' Parentheses are Austen Ivereigh's, not Joseph Shaw's.

Joseph, in fact, made no such arbitrary allocation of sewing to women: nor is it likely he would, as all our children have been taught to sew, irrespective of their sex. Our oldest son has twice won prizes in quilting competitions. However this enlightened attitude is in fact nothing new. Sewing has never been the exclusive preserve of women: consider professional embroidery and tailoring, for which England has for many centuries enjoyed (and continues to enjoy) an international reputation.

The nineteenth century revival of English needlework was also spearheaded by a man, William Morris: and men continue to dominate the highest levels of the sewing professions here in Britain, most obviously, but not exclusively, in tailoring. It's ironic that Austen, in attacking traditionalists for their sexist attitudes, accidentally reveals that the outdated prejudices are all on his side.

The work of the Guild of St Clare is almost entirely concerned with vestments, a special charism which has a profound appeal that speaks to men and women of all backgrounds who love the Church and want to serve her as well as they can. We have welcomed many men, including priests and religious, to our sewing workshops and retreats; the first winner of the Guild of St Clare sponsorship scheme for the Royal School of Needlework certificate course is a man, James Sharpe. And our first chaplain, Fr Bede Rowe, was a noted needleworker.

To misquote Cardinal Ratzinger, it is clear that, in vestment making and mending, men find an encounter with sewing particularly suited to them. Our mission at the Guild of St Clare is to support priests who celebrate the Traditional Mass (and goodness me, they need all the help we can give them right now), and we are very happy to be able to spread our skills as widely as possible so that every Mass can be celebrated with as much dignity as possible, for the glory of God.

We are all struggling our way to heaven, and doing our best to help those around us to get there too. In the end, that is the goal of all our efforts. In trying to beautify the vestments used for the liturgy, in as prayerful a manner as possible, we at the Guild of St Clare make our small contribution to the nourishing and spreading of our beautiful Faith. For "there are diversities of ministries, but the same Lord." This work is for all: and all are welcome to join us. 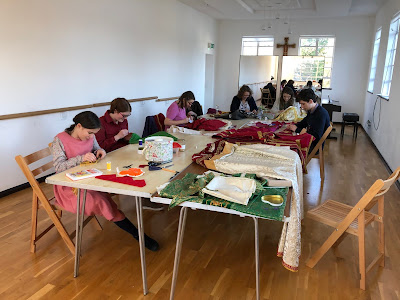 Posted by Queen of Puddings at 05:51 No comments: