The Guild of St Clare held its eight Sewing Retreat at a new venue, Park Place Pastoral Centre. We moved here in order to be able to expand the numbers, as Douai was no longer able to accommodate very many of us. At Park Place we are back to our usual group size of twenty, which means we can build a happy and close-knit community while also getting through plenty of work. As usual we were fully booked, with participants travelling from all over the country to join in: we had representatives from Scotland, Yorkshire, Withermarsh Green and Kent, to name just a few. 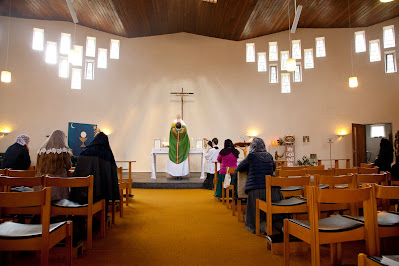 We were very fortunate to have Fr Stephen Morrison OPraem from the Chelmsford Norbertines as our chaplain. Fr Stephen is a great friend of the Guild and has undertaken many repairs and vestment makes of his own. He joined in enthusiastically with the sewing, in addition to giving us spiritual conferences and celebrating daily Mass. His talks were on Our Lady and the virtue of courage: they were very helpful, and also wonderfully consolatory, in what is quite a dark and difficult time for those of us who are attached to the Traditional Mass. 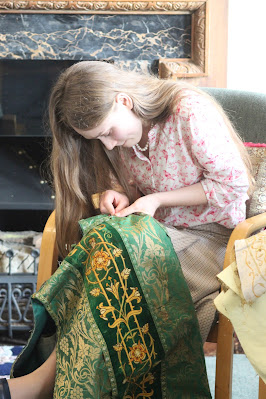 We tackled a number of repairs, including the ongoing work on the Guild of St Clare's own Green Low Mass Set, a gift from Leo Darroch, former president of FIUV. We also began work on various pieces which are needed to make up incomplete Low Mass Sets, including two chalice veils and two humeral veils. 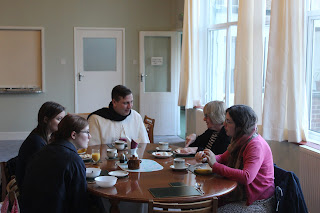 We had the pleasure of a special guest on Friday evening, the film-maker Peter Jones who is probably best-known for his popular YouTube channel, OneofNine, in which he and his wife talk to Catholic families all over the country about their very varied experiences. He has made a documentary for us which brilliantly captures the atmosphere of our retreats.

Our next Sewing Retreat, also to be held at Park Place Pastoral Centre, is in November: places are still available and can be booked online. 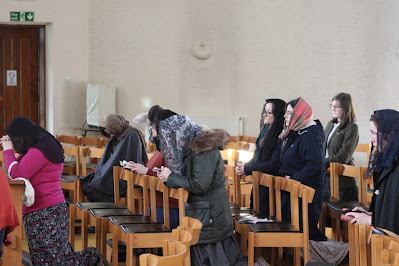 Posted by Queen of Puddings at 06:37 No comments: