The Guild of St Clare held its sixth sewing retreat on the last weekend of February, and we were delighted to welcome Fr Stephen Morrison, OPraem, as our chaplain. We tackled a wide variety of repairs and commissions, including ongoing work on the Latin Mass Society's red High Mass Set, the re-lining of a much-loved chasuble from Fr Stephen's own community in Chelmsford, and the making of three faldstool covers in different liturgical colours for Fr Alan Robinson at Corpus Christi, Maiden Lane. 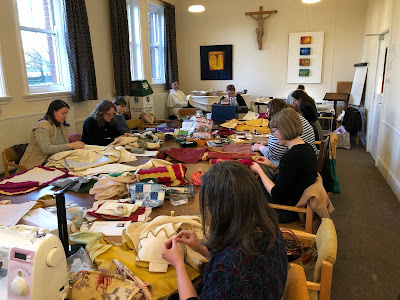 Fr Stephen gave us three allocutions on the meaning of the Mass, and the spirit in which we should participate in it; they were thoughtful and full of insights which made a most helpful start to our Lenten devotions. Fr Stephen also took a very active part in the sewing side of the retreat; he learned to use the Guild sewing machines and assisted us in the making of the black faldstool cover. There is a piano in the room we use for sewing at Douai Abbey, and Fr Stephen played to us on this instrument in his rare moments of rest, which gave us all a great deal of pleasure. 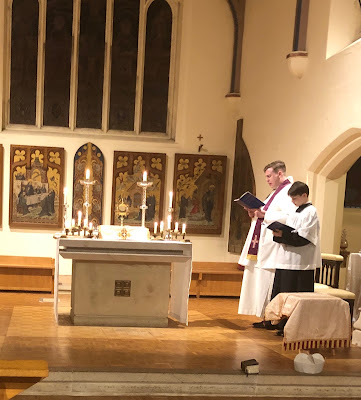 In addition to Mass on each day of the retreat we had morning Rosary, and, on Saturday evening, sung Compline before the Blessed Sacrament exposed, followed by Benediction. We were also invited to attend Douai Abbey's own community vespers, which is sung in Latin. These devotions are central to the work we do at the retreat, reminding us of the spiritual importance of the vestments we are handling and the vital need to treat them with care and respect; and to give them the best possible repair that we can. 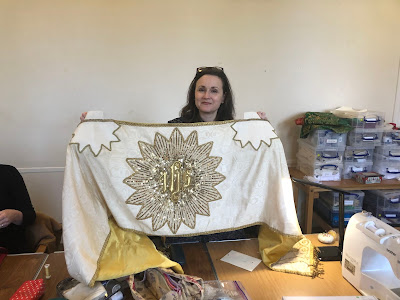 It is a great source of delight to me to see the progress that is made in repairing the many old and damaged vestments that we deal with during the retreats. It is an additional joy to see the number of people who take part in the retreats, all making their contribution to this work. 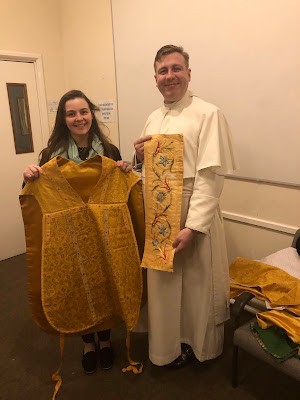 Some of the chasubles and dalmatics we have repaired have needed dozens of hours of work to be done on them, and have therefore passed through the hands of several different retreatants. 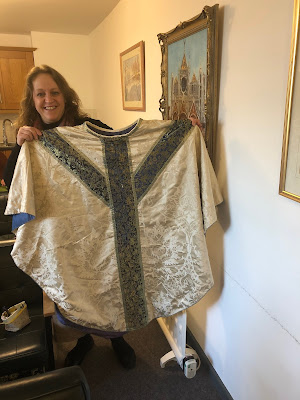 These vestments, though in heavy use, have often not been well treated in the past, probably simply because of the lack of anyone to mend and care for them. This lack is handsomely compensated for by the love and attention that is lavished on them during the Guild of St Clare sewing retreats, when time and thought are not considered too great luxuries to expend on them. 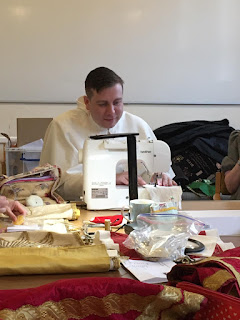 Douai Abbey was as comfortable and hospitable as ever, and we look forward to our next retreat there, on November 20th- 22nd, to be led by Fr Tim Finigan. Online registration is now open: book online here. 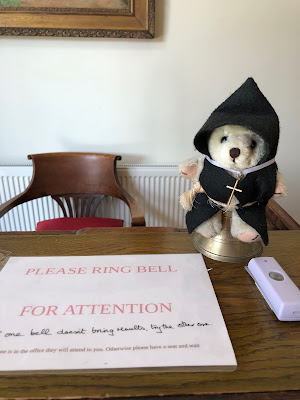