Many members will recognise these faldstool covers, which have been under construction for many months. They were completed during lockdown, and when lockdown 2 was lifted, we were able to take them in person to Maiden Lane to present to Fr Alan Robinson. They were needed for the Second Sunday in Advent, when the parish was expecting a visit from Bishop Robert Byrne of Hexham & Newcastle Diocese. 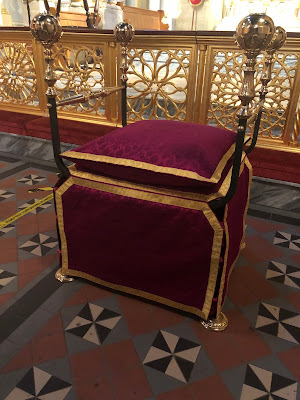 To my relief they fitted the faldstool as they ought, and looked beautiful in the magnificent setting of Corpus Christi, which Fr Robinson has lovingly restored. He has been spending his lockdown in making as many improvements to the church and its furnishings as possible, and the church is a fitting place for pontifical liturgies for which the faldstool is needed. 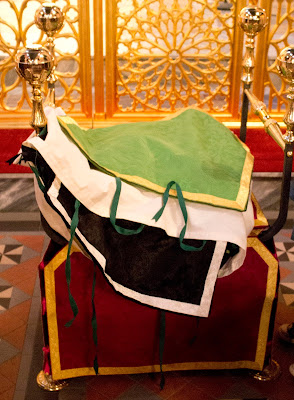 We have enjoyed making these covers enormously, and many Guild members have learned a lot about the traditional methods of vestment making in the process. I know that Fr Stephen Morrison OPraem, of the Chelmsford Norbertines, is particularly looking forward to assisting at a Pontifical Mass at which the black set will be used, as he himself contributed largely to the making of it. 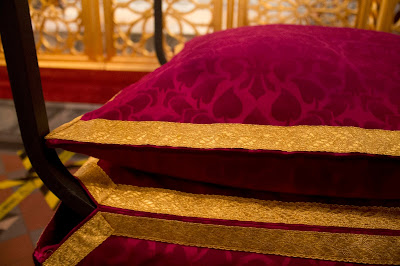 Our next commissions involve making stoles, maniples, chalice veils and burses to complete Low Mass sets belonging to the Latin Mass Society. This will make use of the same skills that we have honed in the making of the faldstool covers: after this, I hope we'll make short work of them. 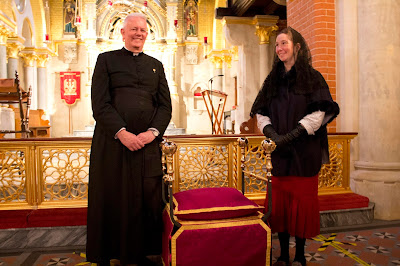