Lucy writes: It was a great joy to attend the LMS AGM this year. The friends I meet there I see very rarely, because most of us don't live in the capital: this year, we had the feeling of shipwreck survivors who have safely gained the shore as we greeted each other and exchanged news. 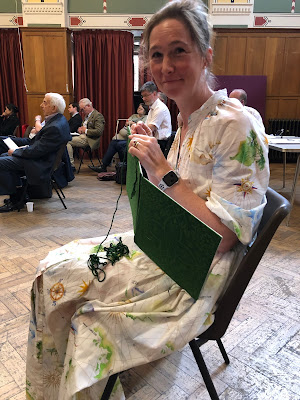 Me making a burse during the AGM

Fr Whisenant's talk was excellent and paid tribute to the faithful attached to the Old Mass: he drew a comparison between the suppression of the Jesuits by Clement XIV and the suppression by Pope Francis of the Mass of Ages in Traditionis Custodes.

The High Mass afterwards, celebrated by Fr Whisenant, was attended by unusually large numbers, and I believe some of the congregation had never before come to an Old Mass. After the sufferings of our community in the weeks since Traditionis Custodes, it was so consoling to attend Mass together in our home cathedral: the atmosphere was extraordinarily prayerful, and I think everyone there felt the same. We were comforted and reassured not only by the presence of so many lovers of tradition, but by the deep spirituality of the Mass itself: it has the power to nourish and sustain us and will continue to do so as we continue the struggle to preserve it.